Mr. Sunil Kumar aged about 26 years suffered from progressive degenerative changes in his both eyes since the year 1986. Ophthalmologists in both private and public sectors were consulted, including the All India Institute of Mecial Sciences, New Delhi, But the progress of the disease was not arrested and finally he was declared totally Blind in the year 2003..

He and his family took this as destiny as all the doctors of Modern Medicine had declared these ailments as incurable.

In March 2003, Sunil Kumar's family came to know about Dr. Ved Prakash Banga, Acupuncture practitioner, through a newspaper and consulted him. At that time Sunil suffered total degeneration of Retina, Macula and Optic Nerve and he had no vision . It was a difficult case.

Even then Sunil was administered five sittings to check if he responds to the treatment and he subjectively noticed some improvement in his perception.

After two months of treatment the optic nerve was revived and there was improvement in the Retina and the Macula as serial photos of Fundus revealed and the vision improved to 3/60.

But unfortunately he had earlier suffered an eye injury during investigations at an other Medical Centre which resulted in the degeneration of the vitreous which hampered his light perception. This was discovered nearly four months after the injury. However the Acupuncture treatment continued.

After the diagnosis of vitreous degeneration about 20 sittings were administered for this purpose only and subjectively he feels 20 percent less obstruction in the light perception.

At present he is able to walk on the public roads without any aid and is able to look after himself. He is able to read newspaper headlines and can also read the upper three lines of the eye chart from a distance of one metre. 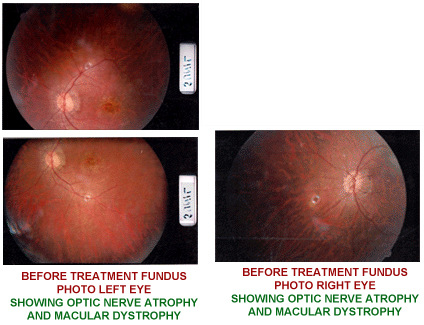 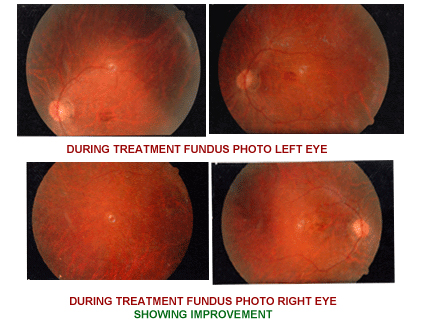